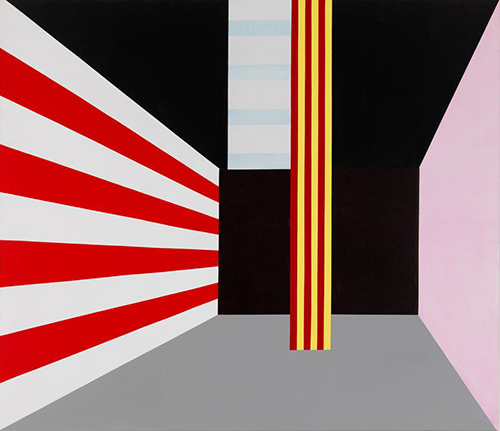 The year 2019 marks the centenary of the founding of the Bauhaus. We would also like to celebrate this anniversary at Museum Haus Konstruktiv, so we are devoting a solo exhibition to former Bauhaus student Roman Clemens (1910–1992) from our own collection. Selected paintings from the 1970s and 1980s are on display, supplemented by archive material that has never been made public before, from our part of the artist’s estate.

The multifaceted oeuvre of Roman Clemens comprises stage sets, architecture, design and painting. He discovered the central themes of his work (stage and space) at the Bauhaus in Dessau, where he attended classes by Josef Albers, László Moholy-Nagy, Wassily Kandinsky, Paul Klee, Ludwig Mies van der Rohe and Oskar Schlemmer. Here, already in the late 1920s and early 1930s, Clemens worked out the fundamentals of his later work as a scenographer and painter: His stage space was to be a space full of tension and action, but which, from the audience’s perspective, would also have the qualities of a well-composed painting.