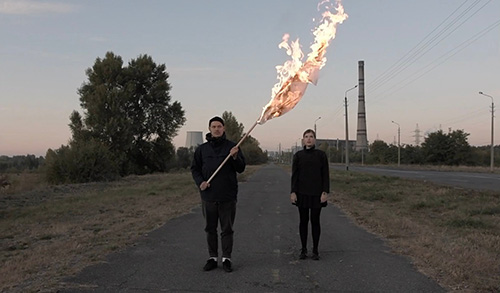 Castello di Rivoli Museo d’Arte Contemporanea presents a selection of filmic works and moving images by contemporary artists from Ukraine titled A Letter from the Front, curated by Nikita Kadan with Giulia Colletti.

Ukrainian artists taking part in this event with their works are currently either stuck in surviving cities and scattered along European land, between borders, inside and outside of the country torn by war or they are possibly moving right now, trying to measure distances with their bodies. Some of them were not able to grab their works saved on hard drives before leaving, so this exhibition is also partly concerned with the ways in which videos are often saved on the web.

“But the bigger the distances are between all of us, the more united we feel in our demand to stop Russian aggression in Ukraine. We cannot be more solidary then we are now, while we face the fact that years of political strivings can dissolve and go up in smoke. The selection of filmic works and moving images presented on this occasion and for this event do not speak about the newborn war. They are rather evidence of the work that had been done (or we thought we had done) to prevent it; it can be seen as a premonition of an evident and inevitable Catastrophe, which historically has often been tangible in the Ukrainian air.” (the participating artists).

The event is introduced by a streaming conversation between Carolyn Christov-Bakargiev and Kadan, who is currently in Kyiv.