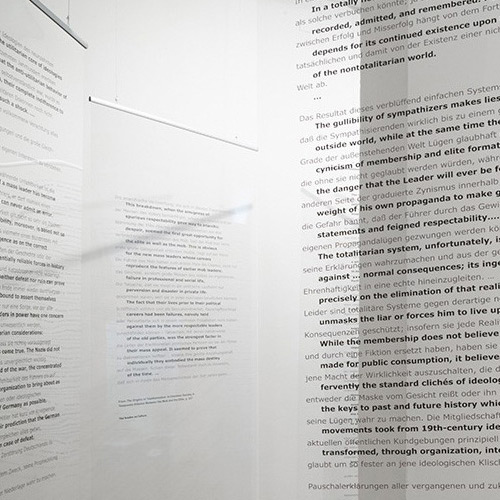 In Martha Rosler’s engagement with theory, critique, and the written word, is a concern for the operations of authoritarianism and the manifestation of current tendencies and policies in the political climate.

The large-scale installation Reading Hannah Arendt (Politically, for an American in the 21st Century), dating from 2006, highlights the significance of the political philosopher’s writings on totalitarianism, censorship, and the culture of fear. Arendt, a refugee from Nazi Germany, fled to the United States where she became a public intellectual, and continued to write and publish in both English and German. Passages from Arendt’s writings are printed in English and her own German versions on translucent panels, which are hung from the ceiling, allowing visitors to encounter the selections from a distance, up close, or overlapping one another.