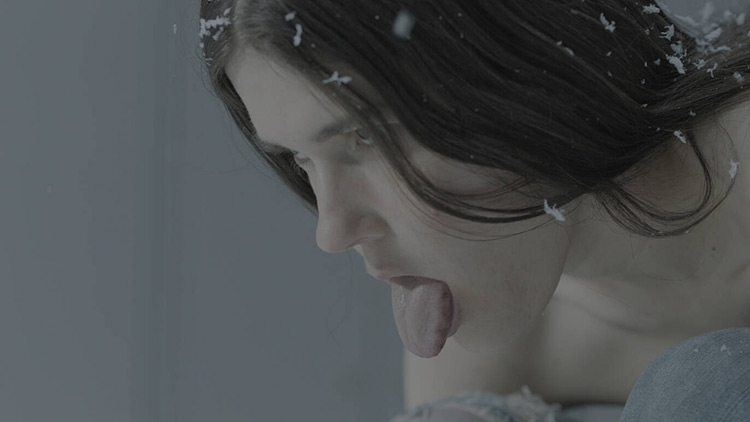 Continuing and expanding upon the narrative arc of Anne Imhof’s recent exhibitions, the works in Avatar II interweave notions of reality and artifice, presence and absence, exposure and concealment.

In the first show to span all four of the London gallery’s floors, the works range from oil paintings, large-scale paintings on aluminum panels, and drawings to film and sound works. Fitness equipment and gym furniture are installed throughout the gallery, blurring the boundaries between functional object and art while creating a multilayered experience as visitors encounter and move through Imhof’s abundant spaces.

Imhof’s spatial orchestrations are evident from the outset: as visitors approach the exhibition from street level, their line of sight into the gallery’s glass storefront is delimited, boxed in by rows of lockers and blocked in part by the back of one of Imhof’s aluminum panel works suspended unexpectedly from the ceiling. Just below this hanging panel, at the back of the room, one catches a glimpse of a painting depicting Imhof’s collaborator Eliza Douglas.

The image is captured from a performance last year as part of Imhof’s celebrated exhibition Natures Mortes at the Palais de Tokyo in Paris. Walking deliberately, her torso nude, she has obscured her face with a sinister clown T-shirt pulled over her head, taking on the guise of a jester. A rare figurative painting in Imhof’s oeuvre, this work sets a tone of beauty, imagined dystopia and foreboding that frequently accompanies the artist’s work.

Imhof’s experimental, restrained approach to installation unfolds further in the subsequent galleries by creating a labyrinthine network with monochromatic banks of gym lockers.

On the one hand these structures create rooms and passageways for the spectator, with benches that encourage rest and contemplation; on the other, they bar entry and connote the secreting of objects and information, while also suggesting the presence bodies and physical exertion.

Another monumental, multi-panel canvas occupies an adjacent room depicting an explosion, and like the portrait of Douglas, it features a three-dimensional effect new to Imhof’s painting practice. Though at first the image appears realistically rendered in grayscale, a closer look reveals fields of pale red and greens, as well as the flattened 3D effect – imagery all painted by hand, but generated digitally.