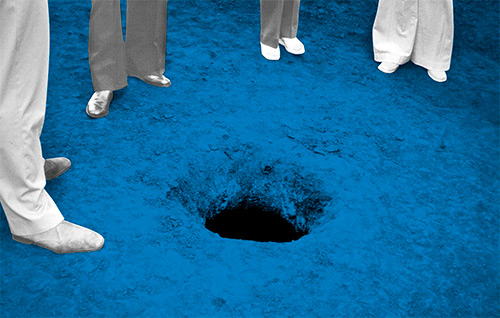 Andréhn-Schiptjenko is pleased to present The Pink Drill, an exhibition with new works by Annika Elisabeth von Hausswolff. The artist was first introduced by Andréhn-Schiptjenko in 1994 and has since then been widely exhibited in Scandinavia and abroad. She is well known for her carefully arranged images with a documentary visual expression and many of her series of works are inspired by crime scene photography.

Recurring themes in Annika Elisabeth von Hausswolff’s works are patriarchal structures, global capitalism, psychoanalytic theories and her deep interest in the photographic image itself. Her interest also extends to the transition from analogue to digital photography, examining the very medium of photography and its tools of the trade. She currently employs techniques such as UV-print on acrylic glass, oil paint, fine art prints and enamels.

Her new works on display at the gallery stem from a series of images initiated in 2020 with the title: The Hole is a Noun. Reflecting the contradictory categorization of an object defined by its absence, the images are based on found photographs from private photo albums and news archives. The subject matter is now being completed with the addition of new images, all relating to the subject. Crotch Blowout and the work that lends its title to the exhibition, The Pink Drill, deals with unwanted holes versus a specific hole that requires a lot of energy and calculations to create.