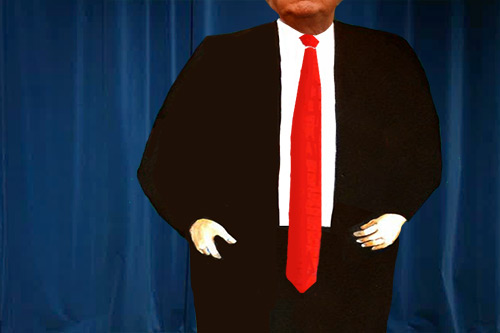 Art sometimes manages to cross the line into politics, and vice versa. Earlier today, this line was crossed then redrawn as 16 prominent artists, authors, performers, architects and others from the Committee on the Arts and the Humanities submitted an open letter of resignation to the president in protest of his response to the recent Charlottesville incident which many understood to be condoning of the behavior of hate groups such as the white supremacists.

There are those who believe art is created through a certain self reflection, a minimum requisite of peering into the soul. Politicians rarely deal in this process. Governance, however, at times having trouble looking into its own heart, should at least take a look into the eyes of its citizens. Or to use a term politicians may understand better, its constituents.

This past week America has seen another chapter in the continuing exchange of a nation that has not moved any closer to being unified since the swearing in of the new administration.

The resignation of these individuals serving on this committee comes on the coat tails of the resignations of numerous members of the business council. (Yes, sometimes art does follow commerce.) The concern now is that with the already diminished number of conscientious individuals leaving the cabinet or advisory committees, we are left with those, not only unconscientious and unqualified, but extremely irregular for the responsibilities entrusted them.

We may remember Charlottesville as the little battle ground of a modern American civil conflict. We can thank the former members of the Committee on the Arts and the Humanities for bringing the discourse into the arts arena. Now we can reflect twice before erecting any statues of this particular lost cause leader. And if we ever do, I would have to nominate an “artist” like Koons to conceive it; this way we could really close the ring where tragedy becomes farce, as Churchill might have described.