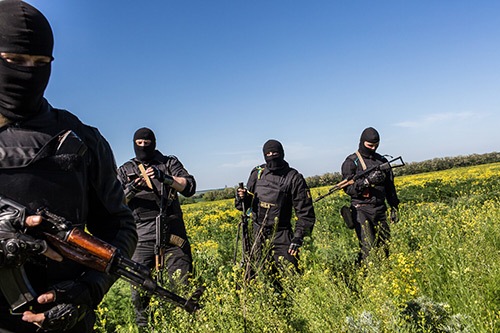 Since protests in Kyiv drove President Viktor Yanukovych from power in February 2014, eastern Ukraine has been convulsed by a separatist insurgency that evolved into a full-fledged war centered in the provinces of Donetsk and Luhansk, an industrial region known as the Donbass.

After some four years, the war grinds on, stuck in an uneasy stalemate while delivering a steady stream of death and injury. For civilians living near the line of contact or within non-government-controlled areas, conflict is like the weather, an uncontrollable fact of life that shapes one’s day-to-day existence. Everyone continues their business as best they can with a practiced sense of normalcy.

For soldiers, enthusiasm for the cause, whether fueled by propaganda or patriotism, is tempered by the toil and terror of survival.

I’ve been photographing the war, and civilian life surrounding it, since its early days in April 2014, one of very few photographers to have continually worked on both sides. My portrayal emphasizes the incongruous absurdity inherent in armed conflict, the shock of the unimaginable juxtaposed with the utterly mundane. If anything is clear, it is that war is real, and it can happen anywhere.