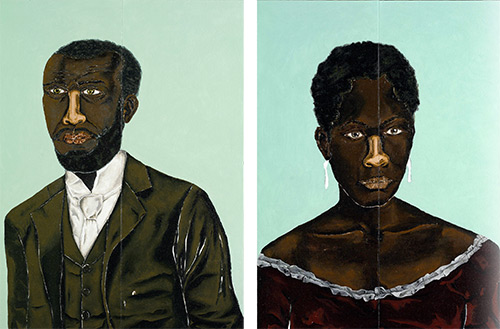 Portraiture has a long tradition in Western painting. As a genre, it became associated with the elites, making invisible protagonists of populations that were not part of the ruling class. Thus, traditional portraits are mostly white and male. In a country like Brazil, with a history of slavery and European colonization, very few Black and Indigenous people were portrayed in paintings, and even fewer were identified with their names in portraits. Hence the importance of Paula’s portraits, for art history and Brazilian history.

Brazilian Portraits brings together 30 paintings by the artist. The starting point is two portraits commissioned by MASP for the exhibition Afro-Atlantic Histories in 2018: Zeferina and João de Deus Nascimento, in the Museum’s collection. Paula researches Black characters in Brazilian histories that have no visual representation, precisely to provide them a face, in a process constructed through fiction and fabulation. If at first to portray them Paula sought historical references, in a second moment, he tells us that he is inspired by the faces of “quilombola people, older people, healers, herbalists, leaders, young people, griot masters, as if I were trying to reach a deeper root.”

The model for the portraits is taken from the vernacular colorized photographs that deserved a special place in the homes of customers, who were portrayed wearing their best clothes, combed hair, body ornaments. Paula explores different shades of blue in the background, and some of the paintings’ features are worth underlining. “The beige nose in the portraits is related to the stereotype of the Black body with the wider nose […], assuming the striking characteristic of such a body”, says the artist. On the other hand, some parts left blank in the paintings, as well as the two canvases that make up each portrait, are related to the artist’s research on the characters’ biography, which lack cohesive narratives, are fragmented, discontinued stories, full of gaps and voids. “How can this be completed by the viewer?,” he asks us.

Dalton Paula’s Brazilian Portraits highlights the stories of Black protagonists, who for so long were erased from official memory; in this way, they enlighten social, cultural, professional, political, and religious experiences. The result is a sensitive dialogue between artwork and biography, which underlines the paintings’ aesthetic and political dimensions.