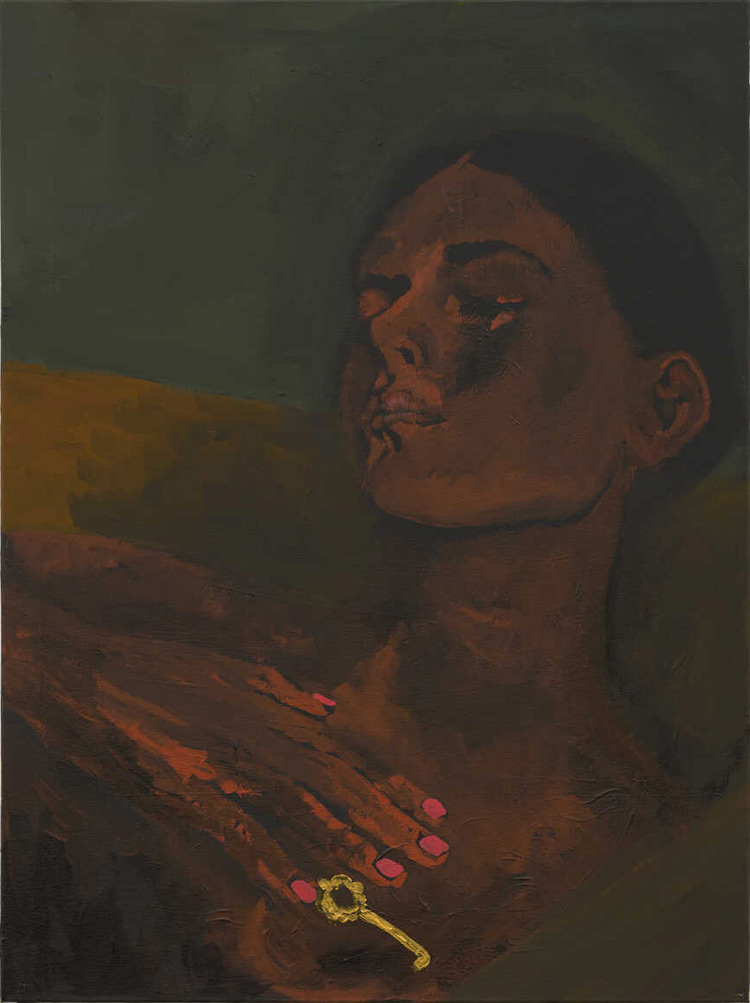 Marianne Boesky Gallery is pleased to present Golden Hour, Danielle Mckinney’s first solo exhibition at the gallery’s New York space. In the new works on view, Mckinney expands and deepens her exploration into female subjecthood. The show’s title, Golden Hour reflects the mood and aesthetic sensibility of her paintings – the soft, resonant light of a particular time of day that often inspires self-reflection and signals the beginning of a period of relaxation. Emotionally as much as physically, Golden Hour marks the transition from the external world of work and play to the internal world of rest and solitude.

Depicted in abstractly domestic settings, the figures in Mckinney’s work offer a radical possibility: a space in which a person is utterly free to be themselves, an existence circumscribed in aesthetic terms of their own devising. Whether sleeping or smoking, sitting or reclining, these figures inhabit a sense of freedom and raw emotion one feels in the safety of their own space. Mckinney’s paintings are strongly influenced by her time spent in Pont-Aven, France and her exposure to the style of Synthetism, with its emphasis on bringing a spiritual dimension into the visual plane. For Mckinney, the spatial possibilities offered by painting are an entry point into accessing universal human experiences and spiritual truths.

As grounded as they are in photography, Mckinney’s compositions are deeply painterly – the photographically inspired technique of starting from a black ground recalls the chiaroscuro of the Italian Baroque or the dramatic contrasts of shadows in light in Spanish Golden Age painting. In Marianne Boesky’s words, “Danielle Mckinney exposes us to would-be private moments with an uncanny tenderness and power. Her figures are at once ethereal and grounded, cerebral and self-possessed. They, in effect, capture the utter essence of women.” As meditative and spiritually moving as they are technically complex, Mckinney’s paintings ultimately propose avenues for expansive empathy and self-knowledge. Working in a deeply humanist vein, Mckinney creates a world for – and from – every subject.