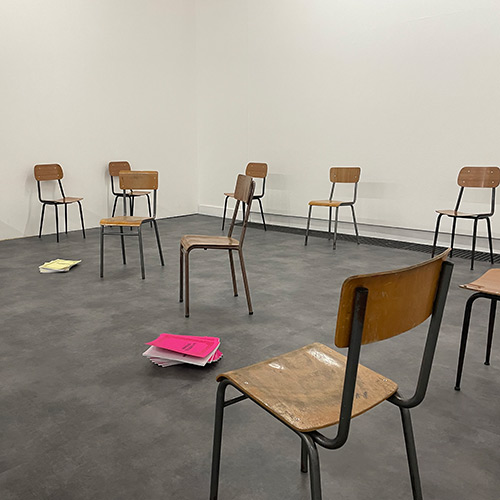 Duplication, reflection, the difference between certainty and illusion together with the fantastic breaking into reality all show just how tricky it is to make a clear distinction between the three realms of subjectivity (the registers postulated by the psychic Lacan: the symbolic, the imaginary and the real) in order to reconstruct an objective world. Jorge Luis Borges‘ tale Tlön, Uqbar, Orbis Tertius, which inspired the title of the project of Dora Garcia’s exhibition at Mattatoio, is a glaring example of that because it is the story of a conceptual apocalypse. The plot tracks an anonymous author’s research into the mystery surrounding the region of Uqbar, whose literature possesses a blatantly fantastic register with some of the stories set in an imaginary land called Tlön. Tlön is a fiction within a fiction, the idea yearned for by a distant mind inhabiting an undefined realm, yet in the end it appears in the real world and subverts it. While the plot may be labyrinthine, it is nevertheless made up of humans and is “fated to be deciphered by humans.” The truth about our imagination is revealed: we thrive on it. Social conventions, identities, history, indeed any fact which we consider objective is in reality arranged by the weaving of the imagination.