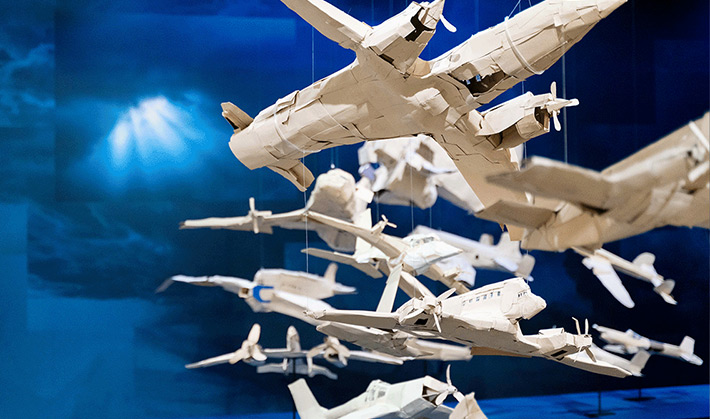 Christian Berst Art Brut presents the work of German artist Hans-Jörg Georgi. Fascinated by the possibility of an escape to a better world, he devotes his time to making model airplanes capable of transporting humanity to a new Eden. After taking over a part of the Maison Rouge in 2014, he was featured in Australia in 2018 at the MoNa, David Walsh’s eccentric museum – following a proposal from The Museum of Everything – and very recently at the Documenta of Kassel #15. For his first gallery exhibition, some twenty of his spectacular sculptures will be shown, as well as his preparatory drawings, as elliptic as they are mesmerizing.

The heavens are the space we hold for our hopes, and also the space in which we yearn to spend the afterlife. They are everywhere we are not. So much so that since time immemorial, they have sheltered our gods, both benevolent and threatening, as well as our thoughts, consuming themselves in conjecture and dreams.

For Hans-Jörg Georgi, skies are the only possible escape from our extinction. Ever since he was born in Frankfurt in 1949, he struggled to find his place – as any child who feels “different.” And since poliomyelitis paralyzed his legs and prevented him from walking, he took to imagining gravity-defying aircrafts. Twenty years ago, he stated with messianic fervor: “I want to do good for the world and I am taking you all on a trip.”

To live up to his promise, he started building a fantastic fleet – made of shoe boxes, as if to add to the irony – capable of enduring a long and arduous journey. This is the central paradox of art brut: Beauty – the only aspect of our world that makes it worth living in – is often created by the most deprived and underprivileged among us. And even if the world is still not perfectly bearable, Beauty offers us an escape into unconditional empathy. As François Salmon puts it in the preface of our show’s catalog, “this gradual ascension from the sensible to the intelligible brings us to both a spiritual elevation and the universalization of our love.”