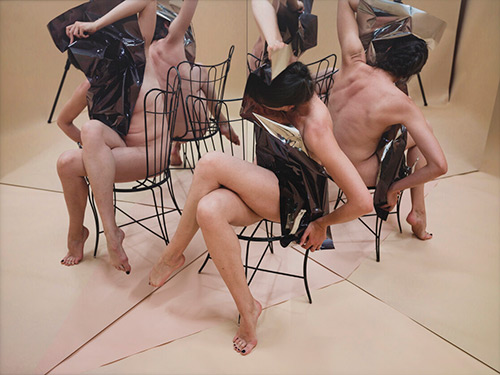 In her second solo show at The Pit, Heather Rasmussen continues her photographic explorations of the body, in carefully composed images that draw on art historical and autobiographical references. Animal, vegetable, mineral will feature several new photographs as well as a photo-based sculpture composed of a ballet barre and a facsimile of a quilted packing blanket bearing an image of Rasmussen’s torso.

In the photographic series, Rasmussen features her own body as well as vegetables and fruit, drawing parallels between a body shaped by a lifetime of ballet and more recently pregnancy, and the suggestive forms of produce grown in her father’s garden. The elongated curves of Tromboncino zucchini recall elegant limbs, while plump, bulbous gourds echo swollen bellies. Still-lifes composed of moldy fruit capture a range of colors, reflecting a fading vibrancy that will nourish new life. Inspired by the history of still life, she has photographed dramatically-lit groupings of vegetables on black backgrounds, in homage to artists such as Spanish Baroque painter Juan Sánchez Cotán and Raphaelle Peale, considered the first still life painter in America. She lays bare the tools of her process however, leaving visible the clips and edges of the seamless paper used as a backdrop.

Throughout her work, Rasmussen employs mirrors, doubles, and repetition, but makes use of no digital manipulation or camera trickery. The illusions created in the tableaus she arranges are captured with a straightforward honesty of method that underscore the complexity of her process. In deceptively layered compositions, she incorporates mirrors to double body parts or copy segments of other photographs. With Photo-multigraph #3 (2021), she recreates a photographic novelty from the turn of the 20th century in which a single subject would be captured from five angles in one image, though her version makes clear the trickery. Rasmussen also uses actual mirrors in some works, expanding the scope of the reflections to include not just specific objects of her choosing, but the gallery setting and viewers themselves.