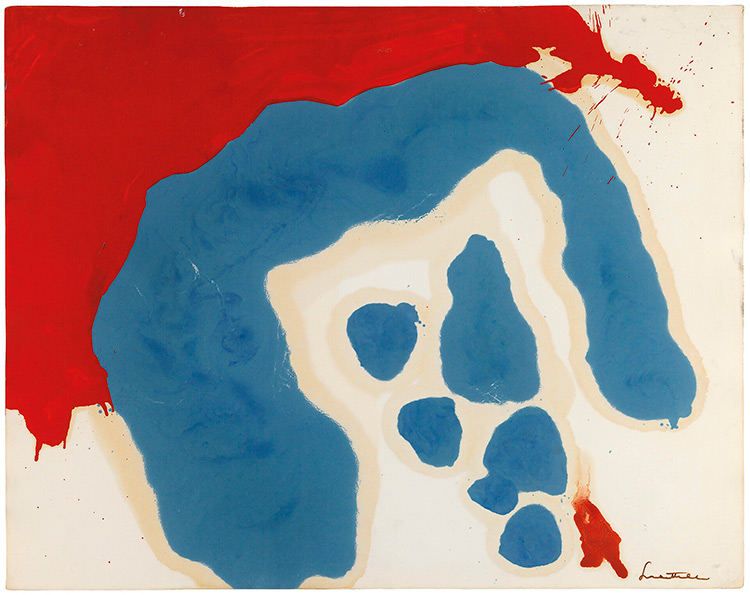 With Helen Frankenthaler, the Museum Folkwang is showing an artist who, at only 23 years of age, revolutionised the male-dominated painting scene in 1950s New York alongside her contemporaries Joan Mitchell, Grace Hartigan, Elaine de Kooning and Lee Krasner. This solo exhibition comprises a total of 84 works. The focus is on Frankenthaler’s work on paper. The medium influenced the artist’s decisive move from Abstract Expressionism to Color Field Painting, with which Frankenthaler became the model for a new generation of painters.

Around 1950/51, Helen Frankenthaler’s working method changed and with it her style. She left behind the cubist conception of space of her student days, the forms in her paintings broke up, the paint liquefied and became transparent. On paper, this development reached a climax with Great Meadows (1951). The work led Helen Frankenthaler to her revolutionary large-format soakstain paintings on canvas at the end of 1952.

In the mid-1960s, Frankenthaler’s painting became minimalist. She placed large-scale zones of colour on the neutral, untreated background of canvas and paper. In this way she created memorable works that corresponded to the spirit of the time. Since 1962, Frankenthaler used acrylic paint instead of oil, which allowed contours, as in the case of Noon (1966). The work was exhibited at the artist’s last retrospective in Germany, which was shown in Hanover and elsewhere more than 50 years ago.

Nature and landscape were elementary sources of inspiration for Helen Frankenthaler’s work. She always drew from them, as shown in Santa Fe XIII, which was created in 1990 during her artist residency in the New Mexico city of the same name. Frankenthaler’s works, however, never depict nature directly; they are more atmospheric references.

In Painterly Constellations i.e., in juxtaposition with 9 selected paintings, it becomes clear that Frankenthaler knew how to use the medium of paper in just as colourful and expansive a way as the canvas, which had become an arena since Jackson Pollock.