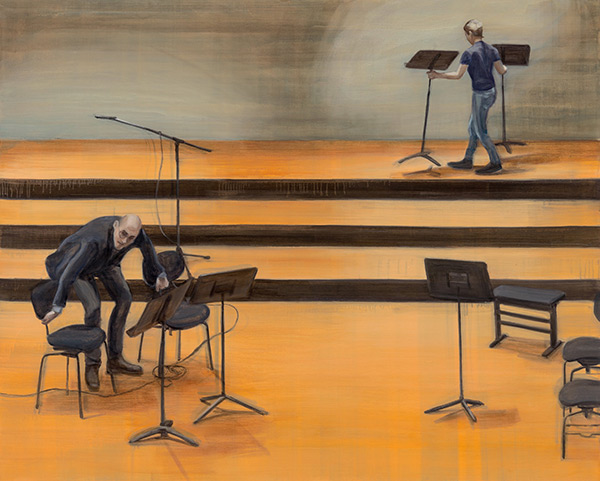 Kukje Gallery is pleased to announce Human Lights, a solo exhibition of the Korean contemporary painter Jina Park. Park employs snapshots to capture scenes of the everyday and translates them onto the canvas as paintings. Portraying the colorful expressions of exhibition installation sites, performance rehearsals, and nighttime sceneries, the platform of paintings allows the audience to look back on the otherwise unnoticed or forgotten mundane life anew. The artist’s first exhibition with the gallery, Human Lights, presents works that demonstrate Park’s experimentations of her painterly perspective on everyday scenes that she has captured using the camera as her assisting tool.

While the show is composed mainly of new works, its narrative begins with an exceptionally earlier work titled Moontan 04 (2007). The Moontan series is a group of paintings portraying nocturnal picnics that had one day started with a friend’s proposal to “go bathe in the moonlight” in a park. Although it is a landscape of basking in the moon, the effect of the camera’s flashlight is much more evident on the canvas than that of the natural moonlight. In the scene captured with the bright flash of the camera, the figures seem much more two-dimensional and acute than in real life. The represented scene appears dramatic, as if being presented by actors on a dark theater stage. As the gaze of the audience follows the actors’ movements into the nocturnal picnic scene, it eventually trails onto the flat sky serving as the backdrop of the stage, the color plane constructed by layers of overlapping brushstrokes. As such, it is through the effects of the camera and artificial light that the artist breaks free of the constraints of representation and seeks new directions for painterly expressions.