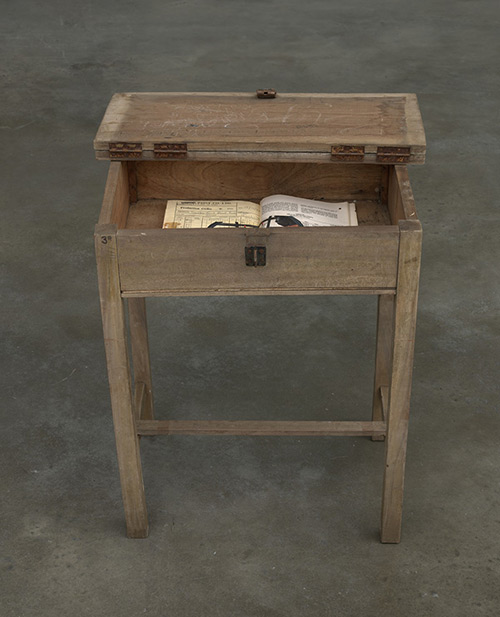 White Cube Bermondsey is pleased to present Lazarus, an exhibition of new works by Ibrahim Mahama, including large-scale installation, sculpture, collage and film. The artist’s third show with the gallery, the works come together to address the passage of time, the notion of obsolescence and the potential for regeneration.

Mahama’s point of departure for the exhibition is ‘Nkrumah Voli-ni’, an abandoned building located in the northern city of Tamale in Ghana where the artist lives and works. Kwame Nkrumah is the name of the first president of Ghana, while Voli-ni, which literally translates as ‘inside the hole’, invokes excavation, teleportation and transformation. In bringing together these two words, the site is not only indebted to history but, at the same time, carries mythical associations. One of many concrete, Brutalist-style silos built to store grain and other food during the post-independence era, it was abandoned in 1966 and became obsolete, flooded and host to an ecosystem of fish, reptiles, birds and a large colony of bats. Driven by an interest in the way time is encapsulated in these architectural structures, Mahama has been photographing and researching silos since 2015, and finally acquired this building with the intention of converting it into a cultural institution. During the exhumation and restoration process, he made the decision to protect its dominant life forms and to keep the bats as co-habitants of the space. In so doing, Mahama is opening up an ecological dimension to the project’s impetus and activity.