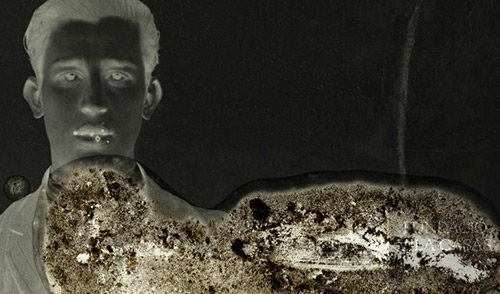 “The old world is dying. The new one is slow to appear. And in this chiaroscuro the monsters are born.” –Antonio Gramsci. The old world (photography as a promise of truth and memory) is dying and the new world (images created by artificial intelligence) is struggling to emerge.

This exhibition ventures through a series of conflicts and violences of our time while always trying to save what still makes us human. It presents half a dozen recent projects, both poetic and disruptive, ranging from “Trauma” to “Prosopagnosia” (made with Pilar Rosado). An alpha and an omega: from the ruins of photography – the images from family photo albums that are damaged and become amnesic, while reflecting their most terrible beauty – to the predictions of possible futures, which we do not know if they will be nightmares of guarantees of progress.

Between the critical approach and the concept, between the poetry and the humour, Fontcuberta’s aim is for the images to cease to be an inhospitable territory and, in short, he wants to tame the monsters.