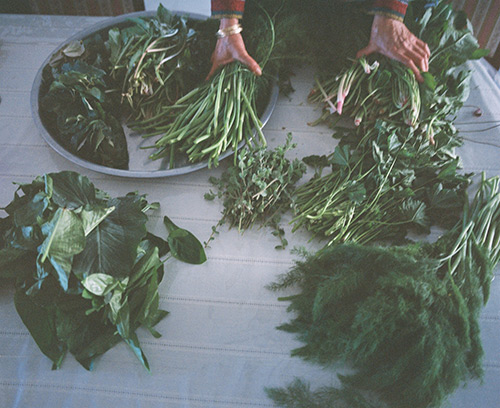 For MATRIX 278, Manna, a Palestinian artist based in Berlin and Jerusalem, presents the installation version of her new feature film Foragers (2022), co-commissioned by BAMPFA. Drawing on the artist’s ongoing interest in the paradoxes of preservation practices and their ties to colonial power structures, Foragers explores the criminalization of Palestinian herb foraging practices  under the pretext of protecting endangered plants. This hour-long film blends documentary, fiction, and archival footage primarily from Jerusalem and the Galilee region of Palestine/Israel, where Manna grew up and continues to shoot many of her films. The project will open at BAMPFA as Jumana Manna / MATRIX 278, the latest installment in BAMPFA’s MATRIX Program for Contemporary Art and Manna’s first solo museum exhibition on the West Coast.

For this film Manna takes as her subject the traditions and power structures that shape foraging for ‘akkoub (a thistle-like plant that tastes similar to artichoke) and za’atar (thyme), both wild edible plants that have been collected for generations in historic Palestine. Foraging ‘akkoub and za’atar has been criminalized by the Israeli government under the guise of conservation efforts, resulting in heavy fines, trials and prison sentences exclusively for Arabs who are caught gathering these plants. Filmed both before and during the pandemic, Manna’s investigatory meditation combines fiction and documentary to trace the entangled cultural and governmental significance of this cultural tradition and its legislation.