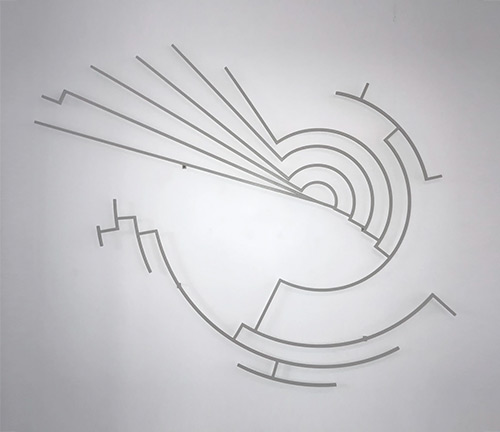 The fourth solo exhibition of Katarina Löfström at Andréhn-Schiptjenko, Point Blank includes videos and two-dimensional works from the past two years, consisting of two series of works: Point Blank and Revolutions.

The exhibition title refers to shooting at close range, but as always Löfström deconstructs and plays with both meaning and words. “Point” could refer to an essence, or a beginning, while “blank” could be a void that should be filled.

The works in Point Blank take different routes to a shared destination. Some start from formalistic visual representations of music, others lean on art historical references, such as visual music and geometric abstraction, and some are based on science and mathematics. They have in common that they are ways of visualizing complex and intangible notions by utilizing codes, notations, and diagrams, resembling mandalas or devices for target shooting.

In her video work, Löfström often begins with a still image. In the repeating, and adding of new images, a sequence and narrative appear. The images flow in and out of each other. In this exhibition, one is invited to revel in all possible viewpoints of an artwork.

As a whole, Point Blank deals with the intersection between violence, transcendence, and desire. Each series refers to targeting by shooting something or someone down, finding solace in the bareness of abstraction, or in the mathematics of diagrams and music.