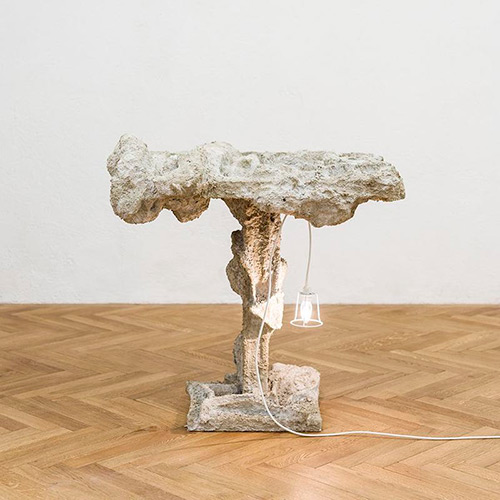 Beneath the glass of a picture tube lying on the forest litter, the mould has its own silent talk show. There is also the trace of a shoe imprinted on the radioactive ground and a black line drawn with a marker on the wall. So we are talking about remains, leftovers, but also about art. The line drawn with a marker by a vandal or artist seems alive and undulating; in its movement you can read the movement of the body that passed this way, along the wall, with a marker. The conversation between things, their reaching out, is what this is about. What are they, these remains? Waste, rubbish, side effects? Or perhaps what we are dealing with here is the perfect continuity of things, in accordance with which anyone who acts always leaves a fragment of themselves within time?

There can be no doubt that the act of making something always involves an act of separation. It is a perceptible process in which one thing begets from itself something else. One being divides itself into two independent beings. One can observe such a model of the world in any nature film that tries to make our minds better able to picture reality to itself: trembling images of cell division, of atom splitting, of the breaking up of particles with names of scientists into even smaller elements. But different perspectives have to exist, different kinds of seeing, lenses cut in different ways. In order to come to terms with them, the principle of the echo would be helpful here, that system of waves which, having been sent out and then rebounded, return different, although unchanged, the same, though entirely new, causing every mind eventually to lose itself, for in the echo one thing turns into another, which ultimately brings about a situation where we call out ourselves to ourselves. There is no room for „mine” and „not mine” in the echo. The wave flows, and in this flowing it changes form, like Patrick Swayze, who turns into a ghost, and the ghost moves on and then on again, and so on it goes round and round in an endless circle.