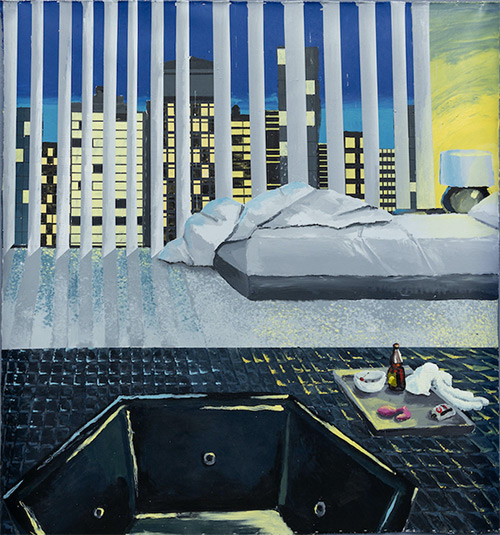 Jacuzzi is the first solo show in Portugal by Berlin-based, Mexican artist Manuel Solano. Some viewpoints shaped our entire idea of the world, then some others remain etched in our memory and, like a smell, will always be able to carry us away from anything we are doing to bring us back to the very same place and moment we “smelled” that view for the first time.

Some viewpoints can change, as the things that surround them usually do, but the feeling that the first memory of them evokes will never change, rather, it will only increase in its intensity over time.

From these reminiscences, deeply imprinted in Manuel Solano’s memory, the artist creates their paintings. After Solano had lost their eyesight as a result of an HIV-related infection, the mental landscape they are holding on to became the roots for a universe ripe with visual references to pop culture, imaginary places and past experiences.

In Jacuzzi, four big paintings portray four viewpoints that the artist never experienced during their lifetime. Drawing on their mental setting, Solano depicts things that others cannot see but through the artist’s paintings. A door that seems to perfectly frame the leather sofa of a waiting room; an unmade bed seen from a jacuzzi; a spiral staircase surrounded by plants; and a black sink with a green bar of soap and a red towel.

Through this series of viewpoints, the artist probes the energy of their imagination but also the structural lines that seem to have shaped their idea of the world. Manuel Solano once said “I have absolutely no interest in making art if it’s not about myself. I don’t see the point.” Nothing better than their words signal the unapologetic self-expression as the ultimate place for political agency.