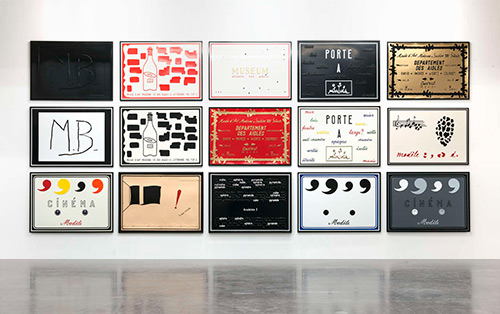 “These plaques are fabricated like waffles, you know,” said Marcel Broodthaers of the plastic plaques he produced between 1968 and 1972, and which continued his work around the effects of publicity and mass media on language and visual communication.

This unprecedented exhibition brings together two related groups of works by Marcel Broodthaers: his “industrial poems” (or plastic plaques) and his Open letters. Both were thought of as editions and were instrumental in the shift in understanding of what an artwork can be, and in the questioning of institutional authority over art.

The years 1968 to 1972 saw large protest movements calling for societal transformation and anti-conformist liberation. The claim for basic democracy at the centre of the May ‘68 student revolts saw the black flag prevail over the red flag. Simultaneously, the unlimited reproduction of multiples – reproducible artworks that undermine the notion of the original and thus of privilege – sought to grant the masses access to culture. Although Broodthaers’s plaques are multiples, they are nonetheless limited editions of seven copies each and reveal a certain skepticism and irreverence towards the ideals of his time