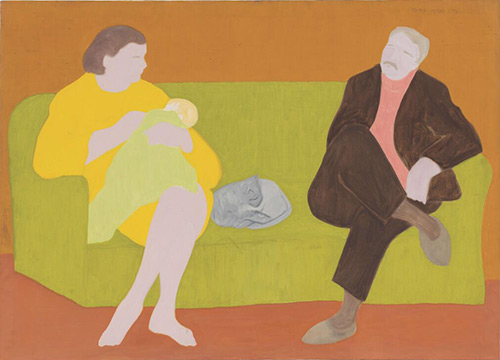 Blum & Poe is pleased to present The Family, New York-based artist March Avery’s third solo exhibition with the gallery and her first in Tokyo. The oil paintings and watercolors presented in The Family epitomize the way that March moves through the world – processing intimate moments shared with loved ones through art making, as though it is another of her basic human senses. Spanning more than fifty years of the artist’s career, these portraits capture daily scenes shared with close friends or family – such as her mother Sally, her son Sean, and her granddaughter Delilah. Commemorating these interactions in March’s signature style – a distinctive fusing of abstraction, figurative motifs, and emotive palettes – these works expose the exquisite in the quotidian, celebrating brief interpersonal exchanges in vivid color and intuitive compositions.

The daughter of revered artists Sally Michel and Milton Avery, March developed both her style and her approach to subject matter through summers spent traveling with her parents in search of, as Sally put it, “new shapes and new ideas.” Milton is now regarded within the art historical canon as a bridge between Realism and Abstract Expressionism – the Averys’ family friends Adolph Gottlieb and Mark Rothko both acknowledged Milton’s important influence on their work. March’s style of painting, while owing much to that of her mother and father, distinguishes itself nevertheless.

Though she always knew she wanted to be an artist, March studied philosophy at Barnard College; thus, her primary arts education was garnered through making work alongside her parents. A simple but pivotal element of March’s practice, one that sets her apart from her elders, is her use of a camera when documenting subject matter – March uses this device as well as sketching for initial documentation, whereas her parents would only sketch. March’s work is also occasionally informed by a source of inspiration that she has said her parents would never utilize – the artist’s own imagination.