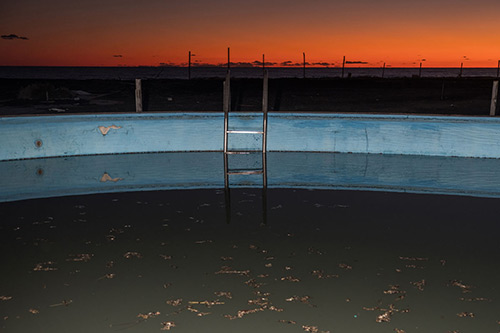 Mareterno is the first show by Lorenzo Catena and Valeria Tofanelli, two promising young photographers who are among the most original and interesting figures in contemporary Italian street photography.

Both from Rome, they do most of their work in the city where they were born and grew up, creating personal photography projects that have not only won them prizes and honorable mentions but also publication in important books and magazines of the sector. Their pictures have been exhibited in cities all over the world.

The show features 11 pictures from each of them, for a total of 22 photographs that are representative of a much larger and more ambitious two-person production which took place over a period of one year and a half – from the beginning of February 2020 to the end of June 2021 – in which Ostia and its coast plays the leading role.

The coastline is low and sandy, extending nearly 17 kilometers to where the River Tiber meets the Tyrrhenian Sea, and where Romans go in the summer to spend their free time together. Despite being effectively a neighborhood of Rome since 1930, its strong identity and geographical extension make it easy to see Ostia as its own city, within a city. The result is that its relationship with the Italian capital can at times be difficult and controversial, and not everyone agrees that the lidois indeed really a part of the Eternal City.

Lorenzo Catena and Valeria Tofanelli decided to explore the complexity of this area, admiring how the passing of time is marked out by the coming and going of the seasons, with the result that they found themselves photographing places left deserted, seemingly abandoned for the winter, awaiting the summer crowds to return and bring them back to life. During this trip along the furthers reaches of Rome, the two photographers often let themselves be guided by chance, which led them to discover very different stories, each featuring a unique way of relating to the sea: for leisure, by choice or by necessity. The result was a personal and engaging experience that allowed them to discover a reality they didn’t know was there, despite it being so nearby.