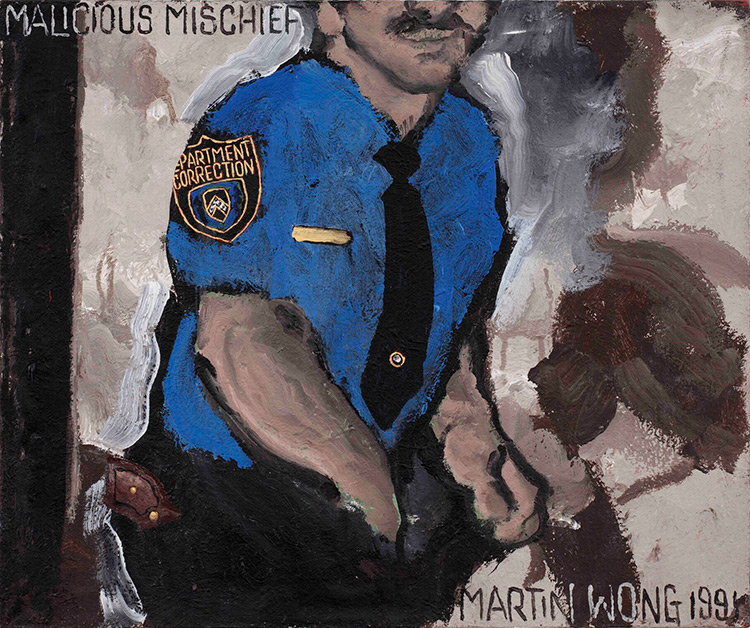 Martin Wong: Malicious Mischief is the result of exhaustive research into the life’s work of Wong from his early creations on the US East Coast to his work in the late-1990s. The exhibition aspires to expand Wong’s practice and recognition among a European audience and to situate Wong within a group of artists, who are known for their political commitment and ability to reflect their chosen life contexts in their art. In consequence, the exhibition explores sociological and political aspects of Wong’s work as well as the way these underscore the transfer of language to the medium of painting.

Martin Wong is a key example of counterculture in the US, straddling the geographic boundaries of the East and West Coast, as well as the boundaries of the cities in which he lived and worked – whether it being e.g. in San Francisco near Chinatown in the 1960s and 1970s or Loisaida in New York in the 1980s and 1990s. These cultural and formative spaces provided him with the opportunity to grow artistically. As part of his highly poetic approach, Wong created compositions of different layers in his paintings – not only layering color, aesthetics, and history but also learnings gathered from personal experiences and interests. His works openly adopt an irreverent stance to various different social, sexual, historical, and political themes that were rarely given any recognition within the art establishment and its discourses at the time.

After its iteration at Museo CA2M, the exhibition will travel to KW Institute for Contemporary Art in Berlin, from 25 February to 14 May 2023; Camden Art Centre in London from 7 July to 17 September 2023; Stedelijk Museum in Amsterdam from November 2023 to February 2024.