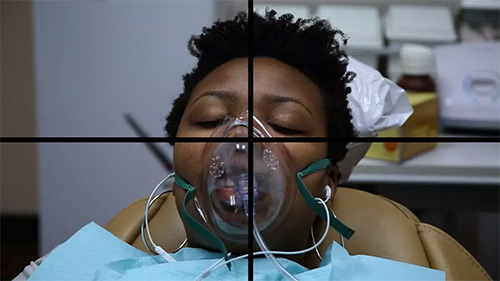 Martine Syms is widely recognized for a multidisciplinary practice that reflects on contemporary visual culture with humor and biting social commentary. This solo exhibition features Syms’s She Mad series, an ongoing conceptual project that takes the form of a semi-autobiographical sitcom about a young woman trying to make it as an artist in Los Angeles. Drawing from a range of sources including early cinema, television shows, advertisements, and internet memes, Syms dissects the ways Black experiences are mediated on television, in film, and online. The show marks the US premiere of the fifth and newest episode of She Mad—and the first time that the series will be shown in its entirety.

The exhibition situates these five video artworks within an immersive sculptural installation constructed from exposed aluminum studs painted in the artist’s signature shade of purple—a reference to both the chroma key backdrops frequently used in post-production of films and television shows and Alice Walker’s 1982 novel The Color Purple. Like the exposed walls of the installation, Syms’s videos lay bare the structures that shape the images and videos we consume.

The exhibition is produced in collaboration with Bergen Kunsthall. The MCA presentation is curated by Jadine Collingwood, Assistant Curator, with Jack Schneider, Curatorial Assistant. It is presented in the Bergman Family Gallery on the museum’s second floor.