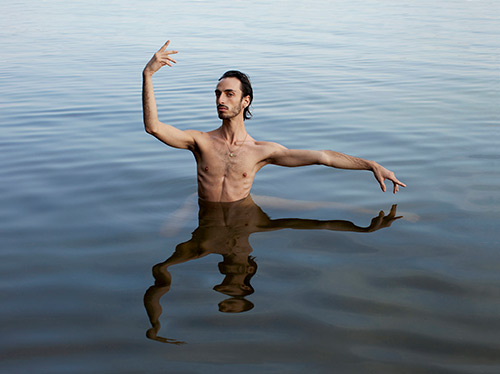 Alchemists believe in the ultimate unity of matter and spirit; the direct correlation that exists between the tangible physical world (the Body) and the immaterial realm of consciousness (the Soul). To them, the human Mind is the special place in the cosmos that stands in between the two, and is thus able to conceive them not as separate, but rather as parallels on different dimensions.

As Above, So Below: it is the mercurial quality of the mind which embodies the alchemical practice itself. The physical fluidity and mobility of the chemical element is an expression of its ability to stream between the physical and spiritual realm, in endless exchange. Similarly, in mythology, Mercury was the messenger of the gods, who brought celestial information down to the world of the living, and back to the sky.

In his second solo show Mercurial, opening at the Organ Kritischer Kunst, Berlin-based Gøneja uses photography and totemic sculpture as media to bring the ancient spirit of Alchemy alive through a combination of artistic experiments both ﬂuid and idea-driven. An aesthetic territory which aims to transcend the limitations and duality of the rational mind through the use of symbolism, mysterious physicalities, unresolvable narratives and open-ended meanings.