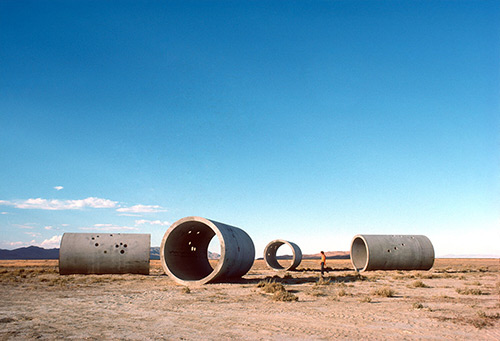 An innovator of site specific installation and the moving image, Nancy Holt (1938–2014) expanded the places where art could be found, embracing the new media of her time. Across five decades she asked questions about how we might understand our place in the world, investigating perception, systems, and place.

Inside Outside explores the artist’s rich artistic legacy through a selection of works spanning 1966 to 1992. This is her first major European retrospective and most ambitious exhibition of her work to date. She produced concrete poetry, sculpture, earth works, audio works, film and video, photography, drawing, and room sized installations. Two of her major site responsive System Works are presented in this exhibition in their first posthumous iterations: Ventilation System (1985–92) and Electrical Lighting for Reading Room (1985).

Perceptions and demarcations of being ‘inside’ and ‘outside’ guide this survey exhibition. Holt herself was an insider and an outsider: she was a key member of the Earth, Land, and Conceptual art movements, yet her work is far lesser known than that of her male peers – a situation this exhibition strives to amend. Highlighting Holt’s commitment to perception, light, and space, Nancy Holt / Inside Outside presents a number of previously unseen photo works.

It includes a previously unpublished self-interview by Holt and three essays where Holt reflects on the ecological impact of her artwork.