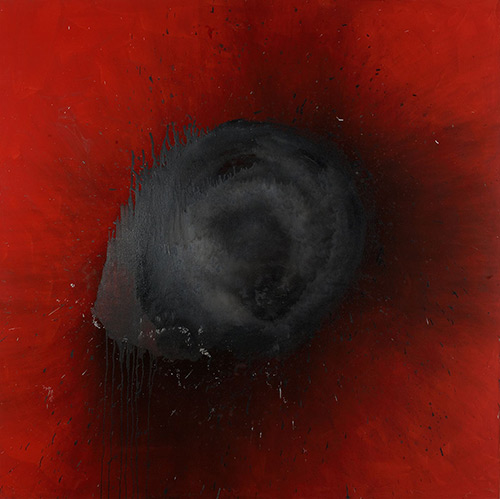 Galerie Gmurzynska New York is pleased to present Rouge et Noir an exhibition of works by Otto Piene (Bad Laasphe 1928 – Berlin 2014), founder of Group Zero, lifelong pioneer of modern art, and key avant-garde figure of the second half of the twentieth century.

“Zero” signified “a new beginning” in Otto Piene’s book. In the ruins of Germany after the Second World War, the movement he founded with Heinz Mack at the end of the 1950s was based on “the idea that reconstruction might be achieved in an artistic way if it started with the mind.” This initiative by young German artists sparked a vast international movement known under the same heading ZERO, which included such diverse and pioneering characters as Fontana, Klein, Kusama, Manzoni, Alviani, Arman, Tinguely, Spoerri, Soto … They all shared a common will to make a clean sweep of the past in both artistic and political terms and to invent new forms of creation on the rubble of the old world. Throughout his career, Otto Piene, leading member of the movement, tirelessly explored diverse innovative forms of visual creation (painting with fire, sculpture on stainless steel, painted ceramic, kinetic installations, film, performance, Sky art …). In this constant reinvention of art, Otto Piene never ceased to challenge the meaning of the artistic act.

A mirror of Piene’s experimental creativity, the exhibition presents a selection of his painted ceramics, fire paintings, gouaches on paper and a light installation. The selection of works focuses on the fundamental combination of the colors red and black in Piene’s oeuvre. The artist used the title Rouge et Noir in several of his works and with multiple media, including painted ceramic, canvasses composed with oil and fire, and light installations, such as the one he showed in 2011 at the Grand Palais in Paris. Rouge et Noir was also the title of his ceramics exhibition at the Leopold Hoesch Museum in Düren in 2010. Echoing Stendhal’s novel, red and black symbolize the passion and quest for the absolute in Piene’s oeuvre. Red and black are also the colors of the fusion of matter, which you see standing in front of the kiln during the firing of ceramic. Like Miró, Piene turned to ceramic in the same post-war period to engage with the nature of material itself, with its elements, and to revisit an archaic practice, remembering the prehistoric artist who fashioned the raw material into a unique form and let it speak to us. Red Bulls (2011), an impressive blood red ceramic, shows four bulls which look as if they belong in a prehistoric cave painting. The artwork was displayed in the Piene exhibition entitled Energy Fields at the ZKM museum, Karlsruhe, in 2013. The source of art, this vital energy is explored by the powerful ceramic work and by the entire exhibition.