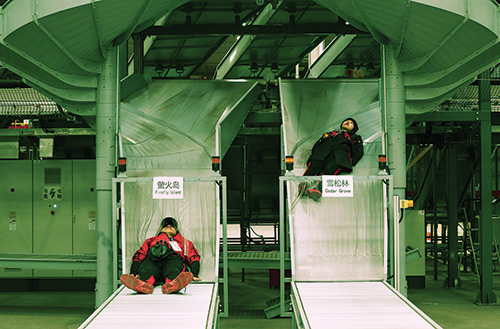 Developed within a period of significant change and uncertainty, this exhibition at Mudam is premised on the inherent paradox within a capitalist system that is both dependent upon and threatened by technological progress.

The exhibition takes its title from a 1993 book, Post-Capitalist Society, which predicted that the impact of information technology on the labor market would be so great that it would ultimately lead to the fall of capitalism by 2020. Published whilst the internet was still in its infancy (Luxembourg, for example, was connected in 1992), it predicted that in the future, knowledge, rather than capital, labour or land ownership, would become the basis for wealth.

Today forms of labour, currency, commodities and the nature of consumption have been dramatically transformed by technologies that continue to evolve. Multinational information technology and e-commerce firms are amongst the highest valued publicly traded companies. Information that is both abundant and infinitely replicable has become a valuable commodity that defies traditional economic principles whereby value is determined by scarcity. Post-Capital presents works by twenty-one artists that variously explore the aesthetics, paradoxes, absurdities and ethical questions posed by post-industrial and perhaps post-capital economies.