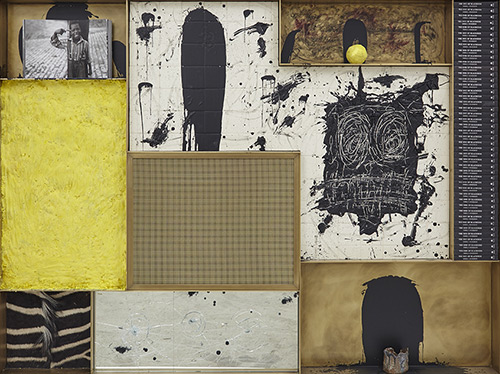 American artist Rashid Johnson stages a major new site-specific commission at The Power Plant. Ricocheting between the opposing walls of this narrow passage, these works are a continuation of Johnson’s series known as Anxious Audiences.

The product of what Johnson has referred to as ‘drawing through erasure,’ in which digging and scratching reveals faces within thickly layered black surfaces, each of these fields registers a character using the most basic inscriptions of personhood.

Johnson’s work harnesses the rich symbolism and histories of varied materials that have personal meaning and at times are signifiers of greater African-American cultural identity. Black soap, made from the ashes of burned plant matter and commonly used in West Africa, is mixed with wax and applied as pigment onto the white tiled surface – for Johnson, a way of complicating associations of cleanliness and healing. The rigidly uniform support equally evokes the tiles of subway stations as well as rational grids of minimalist art, and through Johnson’s frenetically incised portraits a vivid impression of human presence emerges.