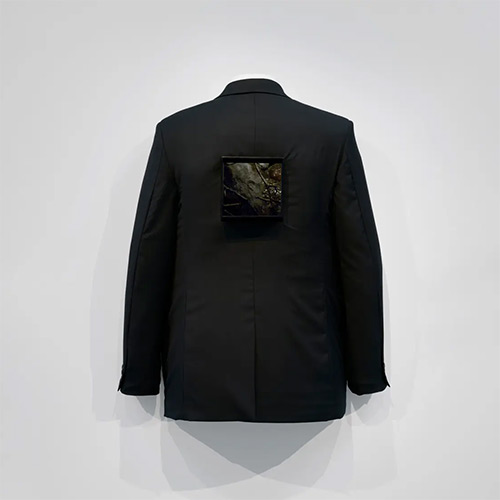 During our long winter of isolation, we spent a lot of time looking out of windows. Robert Gober, meanwhile, seems to have spent his time looking into them. The astonishingly life like objects in his new untitled sculptures, crafted from wood, gypsum, epoxy resin and other materials, sit behind panes of glass in square frames as if on a sill. The earliest of these prescient works, begun in 2018, includes a gentle cascade of paper snowflakes that appear to condense into white Styrofoam packing peanuts. A set of linen curtains, dipped in resin, have frozen mid-flutter. Two works feature fabricated cans of B.A. Farm Grease framed by curtains in a chintzy floral print, once again motionless in an imaginary breeze. Gober has crafted the flaking sashes on these windows from scratch, like everything else that lies within them. Few artists since Joseph Cornell have so deftly cut apertures into the subconscious, and these works permit multiple readings to trickle through them, from fond memories of home to recollections of confinement.

At Matthew Marks, the sculptures are presented alongside a series of recent drawings, all completed in the past year, which depict barred windows embedded in human hands and feet. They invite us to imagine an escape from the prison of our own flesh. As if to drive the point further, at the far end of the exhibition, a square hole cut from a man’s suit jacket, mounted to the wall, offers a view onto a real cascading waterfall. A room of indeterminate height and depth lies within that paternal cavity. Waterfall (2015–16) is one of Gober’s most arresting works, a reminder of all that flows behind our starched facades. If escape is even possible, its route will lead there – not out, but in. –Evan Moffitt