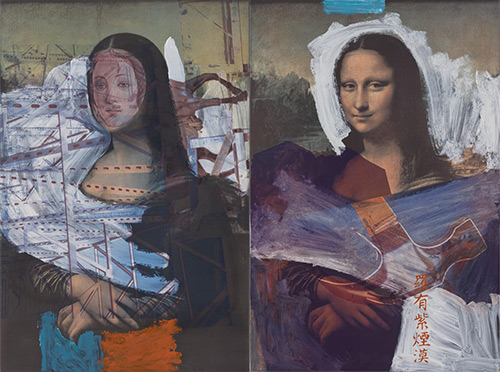 This comprehensive exhibition brings together rarely seen works from two of Robert Rauschenberg’s most innovative series. For a period of 15 years, Rauschenberg made several trips to Japan where he created ceramic artworks using a newly developed technique that combined ancient Japanese pottery traditions with modern innovations.

The Japanese Clayworks (1982/1985) feature sculptural elements, photographic imagery of ancient and modern Japan as well as distinctive brushstrokes. His Japanese Recreational Clayworks (1982–83/1985) comprise prefabricated reproductions of historical Western artworks on ceramic panels, to which Rauschenberg added his own imagery of contemporary Japan from photographs he took across the country, along with gestural brushwork.

The monumental Dirt Shrine: East is one of the first works of Rauschenberg’s series of Japanese Clayworks, which the artist created in close collaboration with the Otsuka Ohmi Ceramics Company (OOCC) during numerous trips to Shigaraki, Japan. The sculptural elements are reminiscent of his Combines (1954–64) and Spreads (1975–83) and by combining elements of both painting and sculpture, he blurred the boundaries between these artistic categories.

The title implies that this work is a kind of temple to the earth. This has particular resonance as Shigaraki – one of six famous kiln sites in Japan – is especially known for the color and qualities of the local clay.

I think collaboration is a prescription or device that keeps one from getting hung up on a strong single intention that blinds. […] Every individual that you add to a project will result in ten times as many possibilities.