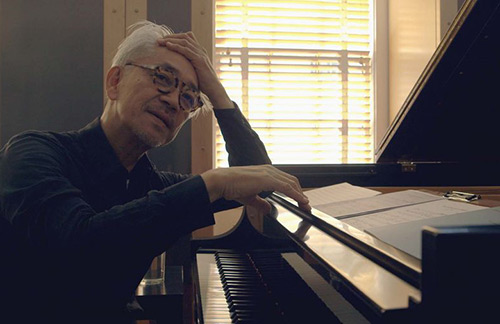 If Ryuichi Sakamoto had been born in 16th century Italy, we’d know what to call him: a Renaissance Man. But since he was born in Japan in the mid-20th century, we have to string together words like composer, musician, producer, actor, and environmental activist. It’s a diverse résumé, but there are two things that match it: one is Sakamoto’s music – pioneering electronic works, globally-inspired rock, classical scores (including a massive opera) and of course those familiar soundtracks. The other is the list of awards on his mantle – among them an Academy Award, two Golden Globes, a Grammy, the Order of the Cavaleiro Admissão from the government of Brazil, The Silver Lion award (Venice Film Festival) and, in July 2009, he was named an Officier of the coveted Ordre des Arts et des Lettres from the government of France. Perhaps most prized of all, was the UN Environment Programme’s Echo Award, for his innovative and groundbreaking work in eco-friendly touring and music distribution.