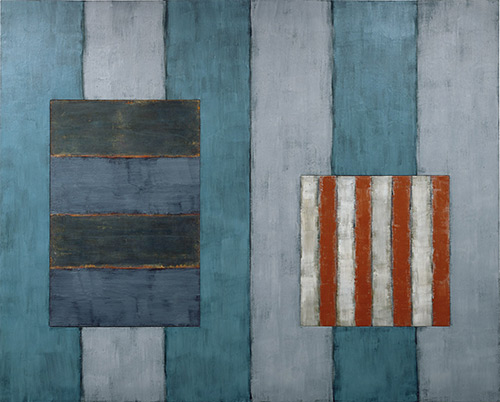 Over the course of his 50 year career, Sean Scully has created an influential body of work that has marked the development of contemporary abstraction. Fusing the traditions of European painting with the distinct character of American abstraction, his work combines painterly drama with great visual delicacy. Often structured around stripes or layered blocks of color arranged on horizontal and vertical axes, the layers in his paintings attain a fine balance between calm reflection and an intrinsic vitality.

A forceful, physical artist, Scully creates intentionally compelling spaces, and his art is defined by acute concentration and care, involving constant negotiation between the monumental and the intimate. While giving primary importance to the physicality of the materials he employs, his art is commanded by the idea of humanity’s betterment, and at the heart of each rigorously composed work lies a near-infinite number of expressive, emotional fluctuations.

During a trip to Morocco in 1969, Scully was strongly influenced by the rich colors of the region, which he translated into the broad horizontal stripes and deep earth tones that characterize his mature style. Following fellowships in 1972 and 1975 at Harvard University, he permanently relocated to New York. In the early 1980s, he made the first of several influential trips to Mexico, where he used watercolor for the first time in works inspired by the patterns of light and shadows he saw on the stacked stones of ancient walls. The experience had a decisive effect on him and prompted his decision to move from Minimalism to a more emotional and humanistic form of abstraction.