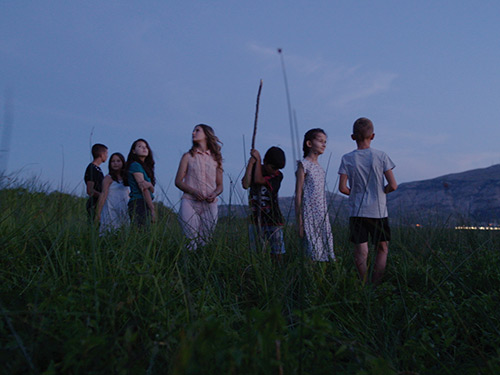 Sons of Cain, written and directed by Keti Stamo, is set in a small village in northern Albania. In this place, time is suspended and the severe rules of an old code, Kanun, still dictate the life and death of the inhabitants.. A group of seven children gather and speak of the story of Cain and Abel. Creating their own dream space, partially consciously and partially not, they create an analogy between their own stories and the biblical fables. Stuck in the fine line between reality and forgetfulness, this is one of the few chances they have to face their traumas and emotions.

The Kanun is a traditional customary law of northern Albania. Divided in twelve books, it was initially oral and got published only in the 20th century, when the Ottoman Empire left Albania. Its origin could date back to the Middle Age or even to the Bronze Age. The laws evolved over time as a way to bring order to these lands. It regulates all aspects of the mountainous life: economic organization of the household, hospitality, brotherhood, extended families, boundaries, work, marriage, land, reciprocity, and so on. There are organizations that try to mediate between feuding families and try to get them to adopt “forgiveness of blood” but often the only result is for men of age to stay in their homes, which are considered sacred so a safe refuge by the Kanun until forgiveness is granted.