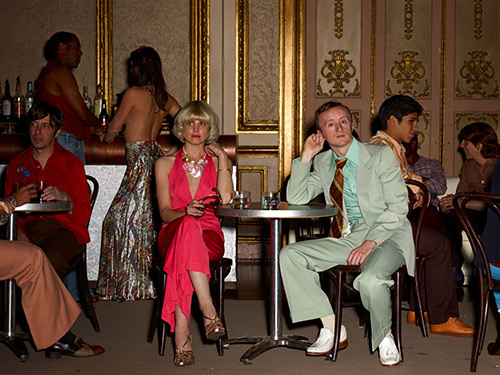 For over thirty years, Stan Douglas has devoted his work to the investigation of the image; the technologies of their making, their aesthetic languages and their dynamics of power. Through photo, film and video installation, television, theatre, mobile applications and many other digital media technologies, he delves into the recreation of moments in history at a cultural, social and political tipping point, to reveal multiple and divergent narratives in meticulous detail.

The exhibition at the PHI Foundation will present the Canadian premiere of Douglas’s most recent photo series Penn Station’s Half Century (2021) and Disco Angola (2012), a series of photos that will be presented in Québec for the first time.

Penn Station’s Half Century was commissioned by the Empire State Development in partnership with Public Art Fund, on the occasion of the dedication of New York City’s new Moynihan Train Hall. Douglas worked with a researcher who rifled through thousands of newspapers and periodicals to select nine historic moments that took place in New York’s original Pennsylvania Station between 1914 and 1957, before it was demolished to make way for Madison Square Garden. Among these selected events is March 1, 1914, when a large number of vaudeville performers staged an impromptu show after being stranded at the station by a severe snowstorm. Another was August 7, 1934, when liberated Black labour organizer Angelo Herndon, who had been arrested for the possession of Communist literature arrived at the station to the greeting of thousands of well-wishers.