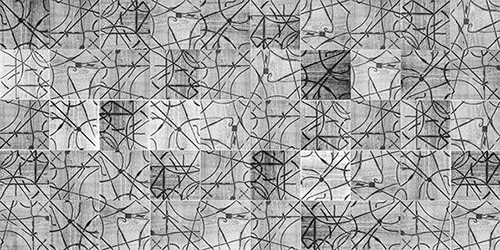 At her solo show at Vintage Galéria, Kamilla Szíj presents three large-scale silk screen prints and a work consisting of smaller prints, which she has made in the last year.

The works, which are unique despite of the printing technique, were based on pencil drawings in case of the six separate sheets, and on four blocks of wood traditionally used for woodcuts in case of the other three works. The blocks were photographed, resulting that not only the carved lines, but also the organic pattern of the wood material appears on the works.

Kamilla Szíj created the base of the works by putting modules together into a square shape, next she drew a line across them, and then she mixed the pieces and connected the median lines to each other. She repeated this process several times, resulting the branching lines occasionally connecting to each other at the edges of the units when the silk screens are printed next to each other in any arbitrary position.