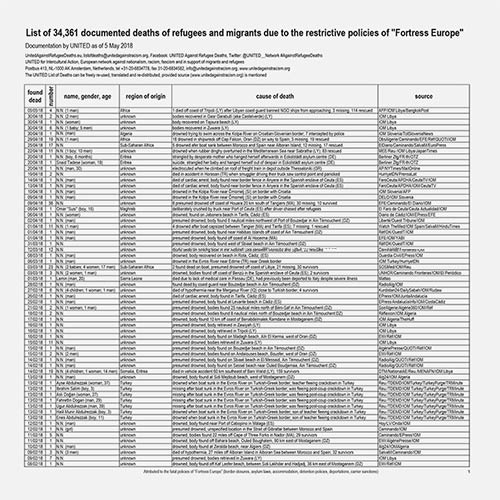 The most recent version of The List has been displayed in cities including Berlin, Istanbul, Basel and Athens and last month on a 280 meter long installation along Great George Street in Liverpool as part of the city’s Biennial art festival. But on display in Liverpool, it was vandalized and torn down twice, first in July, then again just few weeks ago.

The List traces information related to the deaths of over 34,000 refugees, asylum seekers and migrants who have lost their lives within, or on the borders of Europe since 1993. It is compiled and updated every year by the Amsterdam based organization UNITED for Intercultural Action. Since 2006, in collaboration with curators, art workers, and institutions, Banu Cennetoğlu has facilitated up-to-date and translated versions of The List in several countries using public display structures such as ad-boards and newspaper supplements.