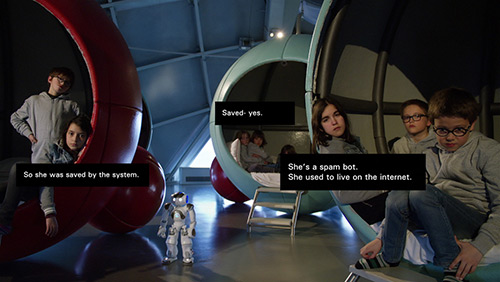 In 2002 Natasha Vita-More posted a conceptual design on an online forum hosted by the futurist Ray Kurzweil, envisioning the human body of the future, which she called Primo 3M+. Her design aimed to achieve super longevity. She declared that biotechnology and artificial intelligence will provide our bodies with extended performance and modern style, with such features as a customized meta brain and a nano-engineered, AI-guided spinal communication system… Primo promised to be the prototype of a customizable, changeable, upgradeable future body, complete with enhanced senses.

The design concept of Primo as the future human body presaged the technological changes of today that are proceeding at an ever faster pace, and the paradigm of technological structure the human species has generated. In The Singularity Is Near, Ray Kurzweil divides human evolution into six epochs, viewed from both biological and technological perspectives, and argues that we are currently in the fifth epoch: the “Singularity.” He declares that the Singularity will be the culmination of the merger of human beings and technology, overcoming the limitations to human progress.

The exhibition as a whole is founded on the underlying idea of techno-animism, evoking the constantly escalating influence of the central premises of posthumanism, including technologically generated “Second Life” entities, virtual bodies, networks of informationized economic systems generated by high-speed algorithms, and the chain of connections joining people to objects and other species, thus producing an illusion of multiple perceptions.