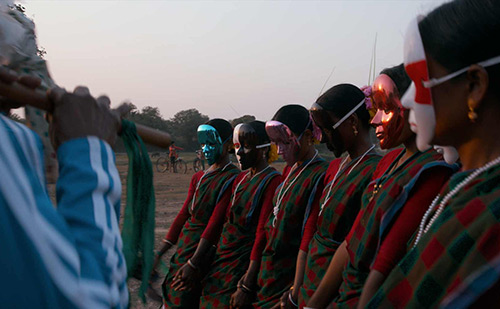 Since 2002, the Otolith Group (Anjalika Sagar, b. 1968, London; and Kodwo Eshun, b. 1966, London) has produced films, audio works, installations, exhibitions, and texts informed by extensive research, decolonial thinking and transcultural friendship. Borrowing their name from a small apparatus within the inner ear of vertebrate animals – a sensitive structure by which bodies orientate, balance, recognize acceleration and position – the artists allegorically mark their intention to operate on multiple dimensions simultaneously.

At the center of this exhibition is the film installation O Horizon, a major work depicting the Visva Bharati school in Santiniketan (West Bengal, India), founded by the writer, educator, and social reformist, Nobel laureate Rabindranath Tagore in 1921. In guiding modern India toward cultural independence and transformation, Tagore anticipated some of the key issues of our global present, such as the environmental emergency, the threat of nationalist and religious extremisms, and the importance of intergenerational transmission. The Otolith Group gages the enduring presence of Tagore’s vision in present-day Santiniketan. The film is introduced by a poem from 1896 in which the latter questions future readers (“today in a hundred years”) about the arrival of spring season and the blooming nature around them. One of the opening impulses in O Horizon is to stage an encounter, in which the viewer responds to Tagore’s poetic inquiry about what might be sent back from the future.

In an exuberant sequence of registers, the film guides us through the campus and its dances, rehearsals and rituals; indoor and outdoor classes; microphones record the mystical songs of Kabir, epic poetry, as well as conversations and plays; lenses capture animal gazes and vegetal depths, observed in silence. Everywhere Tagore’s ecological vision is present as a key to his foundation of Visva Bharati, a place of confluence for arts and crafts in connection with a pedagogy of the Earth. His efforts, cultural and agricultural, to reinvigorate the land by bringing soil from nearby areas, turned Santiniketan into a fertile and vibrant terrain years later. A crucial stage to this transformation emerges at the uppermost layer of soil, in the decomposition and transformation of leaves, grass, fruit, and animal debris form the surface layer agronomists name the “O Horizon”, from which the entire film project takes its title. The Otolith Group considers the poetic and political underpinnings of such a fragile and dynamic space not only as a crucial element for Tagore’s ethos which continues to inform a contemporary thought that is both ecologic and cosmopolitical.

Extensions of this thinking become visible through a series of photomontages titled Santiniketan Studies, a selection of which is presented by the exhibition entrance. This work by The Otolith Group may be seen as a sketch book accompanying the production of O Horizon, but also as an expansion of the film’s archeologic and speculative impulse. Every picture presents the multiple dimensions of various enclaves in the campus, summoning key figures, such as Mahatma Gandhi or the artist and educator K. G. Subramanyan, while layers of generational memory coexist anachronistically. Trees are, meanwhile, a recurring motif in the series – they appear at the center of outdoor circles as the characteristic “tree schools” of Tagore’s educational system. As emblems of nature’s longevity, they are also a manifestation of the regenerative agronomy and the “terraforming” project implemented at Santiniketan since its inception.

Also exhibited in this space is a selection of works on paper by the artist Vidya Sagar (b. 1938; d. 2016), father of Anjalika Sagar, and collaborator in various films by The Otolith Group, to whom O Horizon is dedicated. Sagar was part of a generation who received the influence of Tagore’s school and Santiniketan’s spirit amid the radical cultural transformations in 1960s India. He was one of the most notable examples of Visva Bharati’s transversal culture, according to which all artistic languages communicate with one another. Sagar’s Tantric abstractions use sensuous outlines and delicate pastel hues to generate moments of visual musicality that reinterpret the patterns of Indian iconographies resonating throughout the allusive poetics of O Horizon.