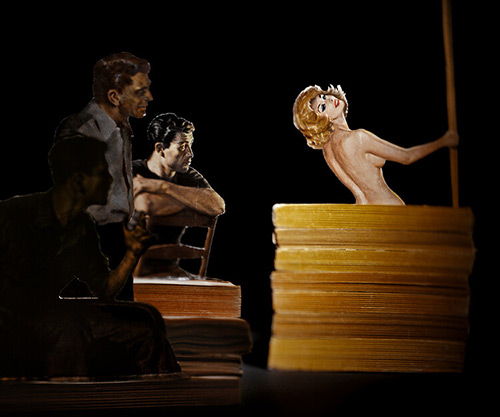 Thomas Allen borrowed his first pulp novel. Permanently. And perhaps without its owner, his uncle, having exactly known it had been lent. Call it an artistic appropriation. Appropriation might best describe Allen’s series, Pulp. Named for the early 20th-century sensationalist fiction genre, Allen creates three-dimensional objects from pulp book cover illustrations, then photographs them.

Allen grew up in Redford, Michigan outside of Detroit. He abandoned his degree in criminal justice to pursue his passion, graduating with a BFA from Wayne State University, and eventually an MFA from the University of Minnesota. Many fellowships and residencies across the country followed before Allen returned to Michigan where he makes art and runs a small hobby farm with his wife.

Pulp demonstrates Allen’s beautiful visual story-telling, but his skill lies in the way that he has made us a participant without our having realized it. As our imaginations start to complete the story he began, we unwittingly illustrate the point Allen seems to be making: No matter how certain we may be that we own our stories, we are in fact ourselves assemblers and collage-makers of so many other moments and lives around us. Any claim toward objective reality through story is, at best, a fiction we have created to give ourselves meaning. And for Allen, this is a celebration of humanity and our capacity to make meaning.