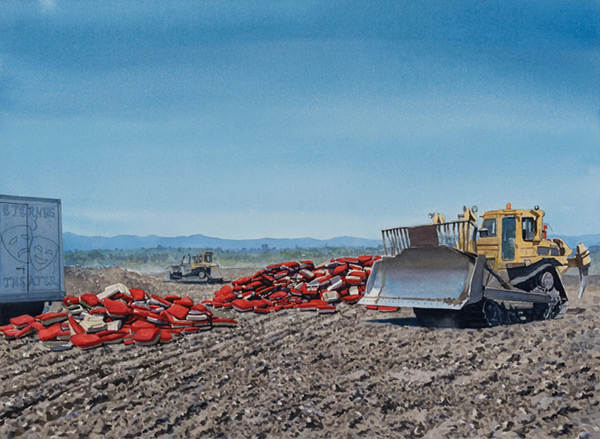 303 Gallery is pleased to announce our seventh exhibition of new paintings by Tim Gardner. Known for his masterful watercolors marking moments in time, Tim Gardner depicts scenes that collectively form a vivid portrait of contemporary life. Drawing primarily on an extensive personal image archive, he uses photography as a point of departure to elucidate the psychological realism of lived experiences.

In his latest works, Gardner continues his exploration of the inherently complex relationship between people and the environment – a dynamic that became more pronounced during the past year as our ability to travel and be outdoors became increasingly formalized, regulated and restricted.

Tim Gardner was born in Iowa City in 1973 and grew up in Canada. He received a BFA from the University of Manitoba in 1996 and an MFA from Columbia University in 1999. Gardner has exhibited his work internationally at such institutions as The National Gallery, London, the San Francisco Museum of Modern Art, Kunsthalle Basel, and the Contemporary Art Gallery, Vancouver. His work is in the collections of The Museum of Modern Art, the Whitney Museum of American Art, and the National Gallery of Canada, among others. He currently lives and works in British Columbia.