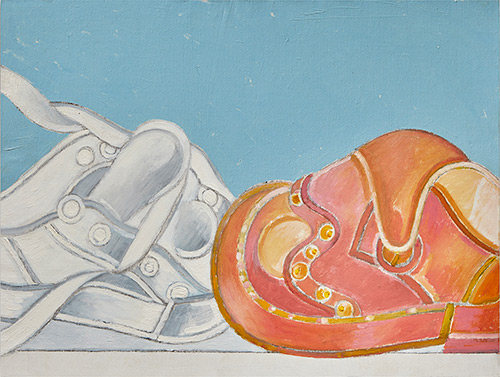 SpazioA is proud to present Umberto Buscioni’s work and specifically, paintings from the last, lesser known two decades of the artist’s activity from the late nineties until his decease that revive elements and images already featured throughout his production in order to reach a synthesis between figuration – which is subject, portrait, self-portrait, in lyrical, intimate tone – and background, which is more than mere landscape or a plane for the image. These mysterious apparitions that one might refer to as sacred domestic conversations appear suspended in a compressed space that has been stratified and folded, over and over again, stratified, ad infinitum.

A number of objects that characterized his paintings of the sixties have also returned in these paintings only for purposes of reference and counterpoint: close ups of motorcycles, shoes, articles of men’s clothing, neckties, signs of the modern world that the artist seems to subtract from the realm of merchandise in order to bestow an intimate, lyrical tone. A suit becomes a space, a tie and a coat hanger become the outlines of surface (a sort of mise en abime or self-replicating copy of the frame, an illustration of the painting); kites are the ambiguous, autonomous element that also makes up part of the landscape; the leaflets multiply the painting’s surface through representation.

These were the years in which Buscioni was one of the leaders, together with Barni and Ruffi, of the Pistoia School, the term the critic Cesare Vivaldi used to identify the work of these three Tuscan artists who shared similar ideas on Pop Art that each one expressed in his own context in his own way.