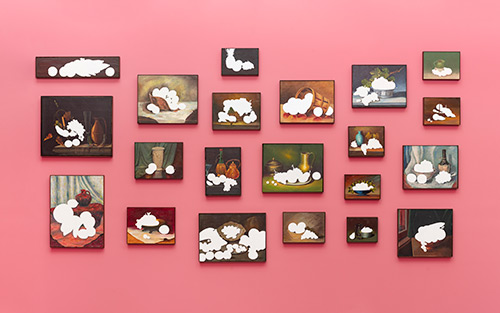 Throughout the process of the new body of work presented at Equivalents, Valeska Soares’s new solo show at Fortes D’Aloia & Gabriel Galpão, the artist purchased more than a hundred anonymous still-life paintings from around the world, appropriating and repurposing them by erasing the images of fruits with white paint, leaving apparent just the corresponding outlines. The works, painted in oil on different surfaces (canvas, wood, paper), have different sizes and make up a salon hanging on a pink background. The installation alludes to issues of desire and memory and further develops the artist’s research on genres of the Art History canon. An essay by curator Marília Loureiro develops critical thinking on the show.

What all examples of “rhopography” have in common is the everyday scenes that silently support the reproduction of life. Consistently, these scenes evoke the repetition of ordinary tasks, small decisions with regards to resources, the taking care of domestic objects and the different species that we use for food. Even though what later would be called still life is marked by the absence of the human figure, it is not difficult to assume that the human body belongs in those scenario. It is also pretty easy to notice the body that stars in “megalographic” paintings, which are full of battles, conflicts and, of course, heroes. Perceived as art history’s finest genre, historical paintings celebrate virtues such as bravery, power, rationality, determination, and sacrifice. This gender division of imagery, separated according to female and male attributes, organizes not only a certain hierarchy of painting, but most of all the way in which scenes of world transformation are narrated, in contrast with what has been understood as a still life (literally, quiet life), unremarkable and meaningless.