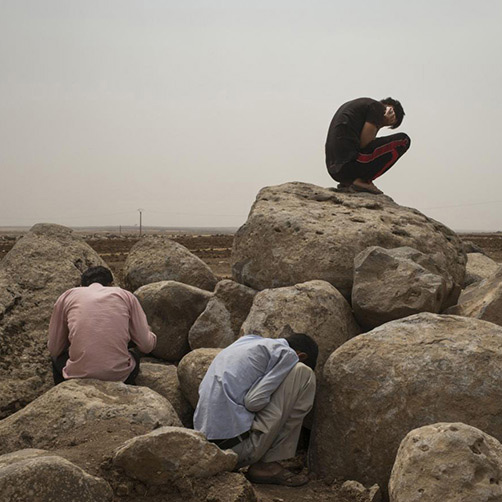 In seized territory all over Iraq and Syria, as is the case with Sinjar in the Iraqi Ninivah province, ISIS have captured, enslaved and committed mass murders against minorities like Yazidis, Kurds, or Shia Muslims.

Following the offensive of the jihadist Islamic State organisation and the siege of Iraq’s second largest city, Mosul, on the 10th of June 2014, as well as self-proclaimed Caliph, Abu Baker Al Baghdadi’s declaration of the Caliphate, which spreads across Syria and Iraq and is ruled by a rigorous and extremist vision of the Islamic law, Kurdish fighters from Iraq, Syria and Turkey have risen against them.

Nestled between Empires and surrounded by conquerors, Kurdish people inhabiting the Kurdistan regions in Turkey, Iraq, Syria, as well as Iran, have been envisioning the creation of an Independent State for a hundred years.

The pictures of this on-going documentary project by Emilien Urbano have been taken in Iraq, Syria, and Turkey.