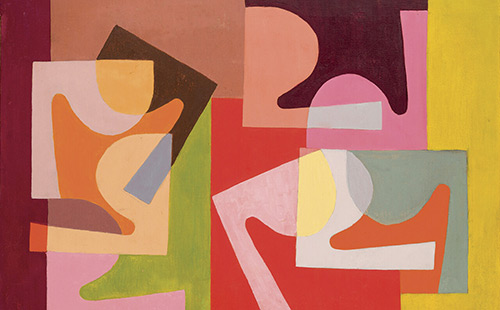 The Guggenheim Museum Bilbao presents Women in Abstraction, an exhibition sponsored by the BBVA Foundation that shares a new vision of the history of abstraction from its origins to the 1980s through the works of more than 100 female artists that span visual arts, dance, photography, film, and decorative arts. Through a chronological presentation, the exhibition reveals the process of invisibilization that marked the work of these artists and highlights milestones from the history of abstraction, questioning esthetic canons without defining a new one.

Women in Abstraction goes beyond the idea that art history is a succession of pioneering practices, and by according female artists a new place within that history, it proves how complex and diverse it is. This can be seen at the very beginning of the exhibition which opens with an unprecedented foray into the 19th century presenting the rediscovery of Georgiana Houghton’s work from the 1860s, undermining the chronological origins of abstraction by tracing it back to its spiritualist roots. Houghton’s work illustrates “sacred symbolism,” one of the themes explored in the exhibition. The spiritualism in vogue in the 1850s constituted a major pathway into abstraction. Women were its precursors in the 19th century: they were the first to invent an abstraction that was not conceptualized as such, defined as a sacred symbolism drawn from a desire to represent the transcendent. The exhibition also shines a spotlight on key figures through mini monographs highlighting artists who have been unfairly eclipsed or rarely shown in Europe. In the catalogue that accompanies the exhibition, the specific educational, social, and institutional contexts that surrounded and encouraged or, conversely, hindered the recognition of women are brought to light. The exhibition reveals why many women artists did not necessarily seek recognition. It considers the positions of the artists themselves, with all their complexities and paradoxes. Some, like Sonia Delaunay-Terk, adopted a non-gendered position while others, like Judy Chicago, laid claim to a feminine art.