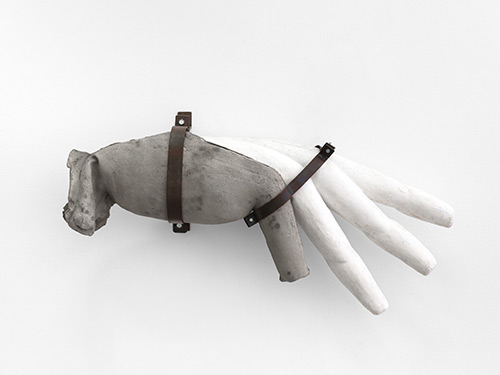 In her first solo exhibition with Sadie Coles HQ, Yu Ji presents an array of new and recent works that span sculpture, installation, video and performance. The human body, both as a sculptural object and a condensed expression of action, is a sustained point of reference. Employing basic materials such as concrete, mortar and iron bars, her sculptures pursue ideas that have recurred in her work over the past decade – the potency of the fragment, the relationship between ‘original’ and ‘reproduction,’ and the tension between individual consciousness and mass urban experience.

Yu Ji has described her works as forming a landscape inside the gallery – a dispersed set of objects and ideas, variously impersonal and subjective. In a new sculptural assemblage, concrete torsos sit or lie in various states of brokenness, evoking fragments of ancient statuary. Their lopped limbs reveal sections of the iron bars that provide their internal structuring, so as to resemble a rubble of reinforced concrete. In places, the bodies have been augmented, filled in, by sections of cast soap that resembles wax, becoming hybrids of different casting materials, dually robust and dissolvable. The figures veer, too, between realism suggesting life casts from certain angles and a semblance of smooth, rounded anonymity.