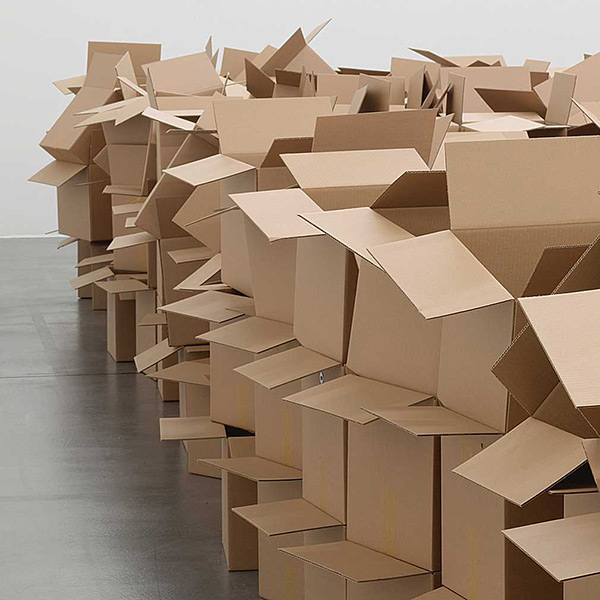 Haus Konstruktiv’s solo exhibition on Zimoun is the largest ever dedicated to this Bernese artist in a Swiss museum. It presents two immersive room and sound installations, which the artist has made from simple everyday and industrial materials, and adapted to the venue’s architectural givens.

Cardboard boxes, metal disks, wooden sticks, felt balls – as banal as the objects that Zimoun (b. 1977) uses in his artistic practice may seem, the effect they have in the exhibition space is spectacular: Hundreds of them, arranged according to certain principles (in grid formation, for example) are set in motion and made to emit sounds with the aid of just as many direct-current motors. Visual and acoustic patterns, generated in a partly random way, immerse the observer in a delightful monotony that is repetitive and multifaceted at the same time.

Since as long ago as the late 1950s, there have been representatives of kinetic art, such as Gianni Colombo and Gerhard von Graevenitz, intensively addressing mechanically generated movement and calculated chance. Zimoun’s art is loosely linked to these historical positions, but also differs from them, as the artist is less interested in movement per se than in the sounds it produces. His search for a dense analog soundscape of noises has played a crucial role. The markedly reduced aesthetics of Zimoun’s installations also open up references to minimal art and minimal music.