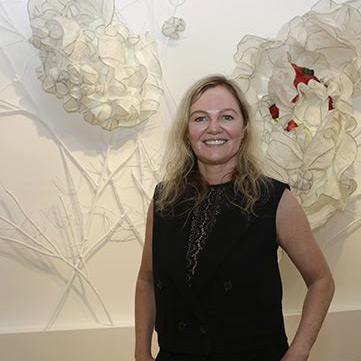 Flo Arnold was born in France and grew up in Casablanca, Morocco. She currently lives and works between Morocco and France. She has had many solo shows in France and abroad, notably at the Marrakesh Biennial in Morocco in 2014 and in 2016, and at the Loo & Lou Gallery in Paris, France in 2018. The crossing of cultures is a key element in her work and has been forged by her many trips through Africa, Europe, and the United States. Her installations display an existential nomadism with artistic gestures that are born from her journeys. In 2016, she participated in the Biennale de Marrakech, where she exhibited her waterproof paper on coated brass installations for the first time at the Musée de la Palmeraie.

Her creations are often backlit and sometimes supplemented with sound. She uses Japanese white paper to suggest ephemerality and fragility, but also a kind of evanescence emphasized by the appearance of levitation. Arnold’s sculptures indeed appear to be floating, and create a space for contemplation and spirituality.